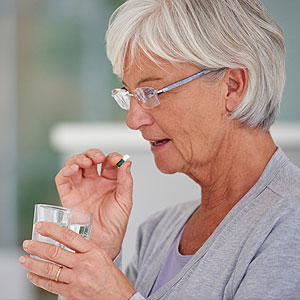 Around 20 million people—mostly women after menopause—take medication to slow the progress of osteoporosis, a debilitating disease that weakens bones. But although effective, some osteoporosis drugs could pose dental issues related to the jawbones.

Osteoporosis causes the natural spaces that lie between the mineral content of bone to grow larger over time. This makes the bone weaker and unable to withstand forces it once could, which significantly increases the risk of fracture. A number of drugs have been developed over time that stop or slow this disease process.

Two of the most prominent osteoporosis drugs are alendronate, known also by its trade name Fosamax™, and denosumab or Prolia™. While originating from different drug families, alendronate and denosumab work in a similar way by destroying specialized bone cells called osteoclasts that break down worn out bone and help dissolve it. By reducing the number of these cells, more of the older bone that would have been phased out lasts longer.

In actuality this only offers a short-term benefit in controlling osteoporosis. The older bone isn’t renewed but only preserved, and will eventually become fragile and more prone to fracture. After several years the tide turns negatively for the bone’s overall health. It’s also possible, although rare, that the bone simply dies in a condition called osteonecrosis.

The jawbones are especially susceptible to osteonecrosis. Forces generated by chewing normally help stimulate jawbone growth, but the medications in question can inhibit that stimulus. As a result the jawbone can diminish and weaken, making eventual tooth loss a real possibility.

Osteonecrosis is most often triggered by trauma or invasive dental procedures like tooth extractions or oral surgery. For this reason if you’re taking either alendronate and denosumab and are about to undergo a dental procedure other than routine cleaning, filling or crown-work, you should speak to your physician about suspending your medication temporarily. Dentists often recommend a suspension of three to nine months before the procedure and three months afterward.

Some research indicates this won’t worsen your osteoporosis symptoms, especially if you substitute another treatment or fortify your skeletal system with calcium and vitamin D supplements. But taking this temporary measure could help protect your teeth in the long run.

If you would like more information on the effect of osteoporosis treatment on dental health, please contact us or schedule an appointment for a consultation. You can also learn more about this topic by reading the Dear Doctor magazine article “Osteoporosis Drugs & Dental Treatment.”

The Real Truth Behind Ed Helms' Missing Tooth in "The Hangover" Ed Helms is best known for his role as the self-absorbed, Ivy League sales rep, Andy Bernard, on television's The Office. But to millions of fans he's also Stu, a member of a bachelor trip to Las Vegas in the 2009 movie The Hangover. In it, Stu and his friends wake up from a wild night on the Strip to find some things missing: the groom-to-be, their memories and, for Stu, a front tooth.

In reality, the missing tooth gag wasn't a Hollywood makeup or CGI (computer-generated imagery) trick—it was Ed Helm's actual missing tooth. According to Helms, the front tooth in question never developed and he had obtained a dental implant to replace it. He had the implant crown removed for the Hangover movie and then replaced after filming.

Helms' dental situation isn't that unusual. Although most of the 170 million-plus teeth missing from Americans' mouths are due to disease or trauma, a few happened because the teeth never formed. While most of these congenitally missing teeth are in the back of the mouth, a few, as in Helms' case, involve front teeth in the “smile zone,” which can profoundly affect appearance.

If the missing tooth happens to be one or both of the lateral incisors (on either side of the centermost teeth), it could be possible to move the canine teeth (the pointy ones, also called eye teeth) to fill the gap. This technique, known as canine substitution, may also require further modification—either by softening the canines' pointed tips, crowning them or applying veneers—to help the repositioned teeth look more natural.

The optimal solution, though, is to replace a missing tooth with a dental implant which then has a lifelike crown attached to it, as Ed Helms did to get his winning smile. Implant-supported replacement teeth are closest to natural teeth in terms of both appearance and function. Implants, though, shouldn't be placed until the jaw has fully developed, usually in early adulthood. A younger person may need a temporary restoration like a bonded bridge or a partial denture until they're ready for an implant.

Whatever the method, there's an effective way to restore missing teeth. Seeing us for an initial exam is the first step toward your own winning smile.

If you would like more information about restoring missing teeth, please contact us or schedule a consultation. To learn more, read the Dear Doctor magazine article “Dental Implants.” Osteoporosis is a major health condition affecting millions of people, mostly women over 50. The disease weakens bone strength to the point that a minor fall or even coughing can result in broken bones. And, in an effort to treat it, some patients might find themselves at higher risk of complications during invasive dental procedures.

Over the years a number of drugs have been used to slow the disease’s progression and help the bone resist fracturing. Two of the most common kinds are bisphosphonates (Fosamax™) and RANKL inhibitors (Prolia™). They work by eliminating certain bone cells called osteoclasts, which normally break down and eliminate older bone cells to make way for newer cells created by osteoblasts.

By reducing the osteoclast cells, older bone cells live longer, which can reduce the weakening of the bone short-term. But these older cells, which normally wouldn’t survive as long, tend to become brittle and fragile after a few years of taking these drugs.

This may even cause the bone itself to begin dying, a relatively rare condition called osteonecrosis. Besides the femur in the leg, the bone most susceptible to osteonecrosis is the jawbone. This could create complications during oral procedures like jaw surgery or tooth extractions.

For this reason, doctors recommend reevaluating the need for these types of medications after 3-5 years. Dentists further recommend, in conjunction with the physician treating osteoporosis, that a patient take a “drug holiday” from either of these two medications for several months before and after any planned oral surgery or invasive dental procedure.

If you have osteoporosis, you may also want to consider alternatives to bisphosphonates and RANKL inhibitors. New drugs like raloxifene (which may also decrease the risk of breast cancer) and teriparatide work differently than the two more common drugs and may avoid their side effects. Taking supplements of Vitamin D and calcium may also improve bone health. If your physician still recommends bisphosphonates, you might discuss newer versions of the drugs that pose less risk of osteonecrosis.

Managing osteoporosis is often a balancing act between alleviating symptoms of the disease and protecting other aspects of your health. Finding that balance may help you avoid future problems, especially to your dental health.

If you would like more information on osteoporosis and dental care, please contact us or schedule an appointment for a consultation. You can also learn more about this topic by reading the Dear Doctor magazine article “Osteoporosis Drugs & Dental Treatment.”